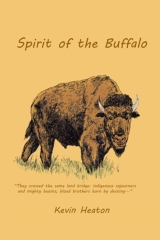 Kevin Heaton writes with passion from his love for a land, its people, their obsessions- his, and from a gallery of memories. In addition to Spirit of the Buffalo his chapbooks include, Measured Days (Heavy Hands Ink Press, 2010), Breaking Ground (MLM Press, 2011), Chronicles (Finishing Line Press, 2012), and Family’s Family (Aldrich Publishing, 2013). His poems have appeared in Beloit Poetry Journal, Guernica, Raleigh Review, Beecher’s Magazine, Crannóg, and many other fine publications. Three times nominated for the Pushcart Prize, he has also received nominations for Best of the Net, and Best New Poets 2013.  You can find more information and additional books by Kevin at http://kevinheatonpoetry.webstarts.com/.