It’s more than poetry, these are historical recipes that are viable, and from his mother’s recipe box. Poems do not need forms, they need recipes, and Shelby Stephenson’s poems cook. They inter-weave ingredients with metaphors to create delicious poems that entice our palates and our imaginations. Stephenson uses ingredients such as flour, sugar, butter, and eggs to bake enormous poetry cakes, cakes packed with memories and sensual flavors for all. ~ Andrew Jarvis, editor, poet, and author of Choreography, Sound Points, The Ascent, and The Strait 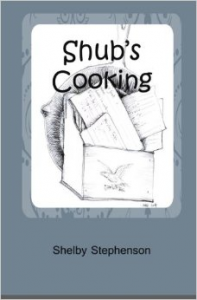 The Hunger of Freedom


The Hunger of Freedom sings history, 19th century and 20th century, with distinct cadence. The author, Shelby Stephenson explores family, ancestors, ghosts and landscape with razor-sharp clarity. This detailed collection of affecting poems depicts a sense of place and the slaves who toiled there. 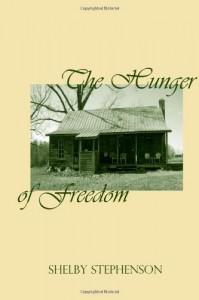 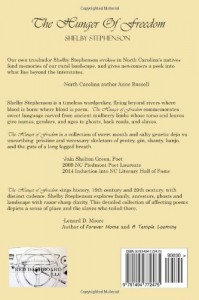 On February 2, 2015 Shelby was installed as the Poet Laureate of North Carolina.   The program featured one of his poems from Hunger of Freedom, titled “This Place, Their Praise.”