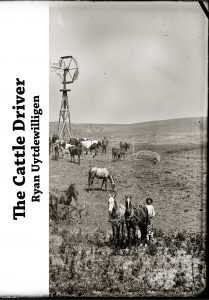 The Model T changed the world.

And it introduced a whole new world to a crusty cowboy still trailing through dirt on his horse. There was to be no modern machinery on his Texas ranch—the man hated anything that dimmed the spirits of the old west.

But when his children pitched together for a birthday gift and presented him with four wheels and a seat, curiosity got the best of him.

The aging cattle driver finds new life in the fast lane while those around him, including his dusty penned-up horse, fear for the future.

Praise for The Cattle Driver:

“The Cattle Driver is like one of those 1930’s Old West movies – the good ones – that were rich in colour and character. You can almost feel the dust and wind as you read about old ways surrendering to new ways. It may be set in the past, but the tale has resonance with the present and even the future.”

“It reminded me a lot of Steinbeck’s The Red Pony. I enjoyed the story. Sure would be easy to make a teleplay out of it!”

Ryan Uytdewilligen is a writer and film buff whose adolescence on the family farm inspired his writing. In 2016, he published his first non-fiction work: a film history examination called 101 Most Influential Coming of Age Movies. That same year he released his first fiction book—Tractor, a YA novel with Sartoris Literary. His second non-fiction book, The History of Lethbridge, will be released in the Fall of 2018 with Summerthought Publishing. His next fiction work, Akela, will be widely released in the Spring of 2019 by BHC Press.

Ryan’s article and blogging work has appeared in a variety of different sites and publications including Quirk Magazine, Thoughts on Lots, Kitsilano Connect, Sessions X, The Babe Report, Taste of Cinema, Camera in the Sun, and InFocus Film School. He has served as a judge for the NYC Midnight Writing Festival for the past two years.

Ryan currently resides in Langley, British Columbia, and maintains hints of the country lifestyle through is writing and volunteering with 4-H.